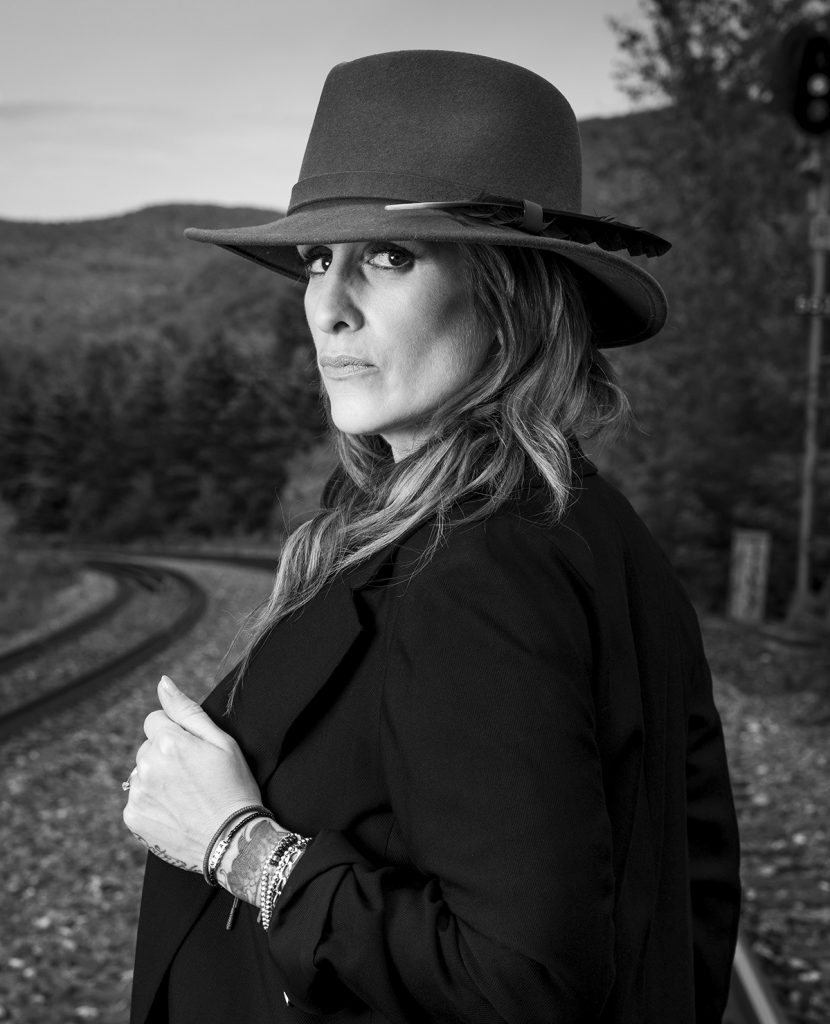 From a very young age, Anik Jean has been drawn to performing. While attending a David Bowie concert with her mother when she was just 11 years old, Anik had an epiphany: she was going to be a famous singer-songwriter…She quickly learned how to play guitar and piano and embarked on an adventure that would take her from her native Gaspésie to Los Angeles before eventually returning to Montreal. In the spring of 2005, her first single, Je suis partie, cracked the Top 5 on the radio charts in Quebec, which laid the groundwork for the successful release of her debut album Le Trashy Saloon in August of that same year. The song was written by Anik’s mentor, Quebec rock legend, Jean Leloup, who also co-produced the album with David Strutton. Anik co-wrote the follow-up single, Junkie de toi, with Jean Leloup, and it quickly became her biggest radio hit. Anik was not meant to stand in her mentor’s shadow for long. Her talent, boldness and singular style were immediately recognized by her peers and celebrated in the media, which led to her opening for The Rolling Stones when they played a concert in Montreal in January 2006.

For her second album in 2008, Anik worked with Mark Plati, the producer for David Bowie, Alain Bashung, Louise Attaque and Les Rita Mitsouko. She was backed by top musicians, Earl Slick, Mike Garson, Sam Harrison, Jean-Sébastien Chouinard, Alec McElcheran, Julien Blais and Antoine Gratton. The resulting album did not disappoint: Le ciel saigne le martyre is, like the artist behind it, an intense rock record that decisively shows that smart can be sexy. The album showcases a newfound maturity and cements the scope of the singer’s talent. The first single, Oh mon chéri, shot up the charts and caused a sensation among her growing fans. In 2010, Anik Jean produced her third album herself, the self-titled, Anik Jean.  Recording in New York and Montréal, the singer-songwriter co-wrote some of the songs with her friend, Earl Slick, and finished the album with musical help from Gail Ann Dorsey and Sterling Campbell, two members of David Bowie’s group. The single, J’aurai tout essayé, a duet with Robert Smith of The Cure, stayed at the top of the charts for nearly a year. The album was later nominated for “Best Pop Album” at the ADISQ awards. 2013 was a busy year for Anik: she composed the music for her celebrated husband, Patrick Huard’s, new stand-up show; she made her on-screen debut in the film Filière 13 (File 13), and she became designer Marie Saint-Pierre’s muse. Also in 2013, she was inspired by her brother’s struggles with schizophrenia to write her fourth album, Schizophrène. Recorded entirely in her home studio, the abstract and highly personal album was dedicated to her brother, who passed away that same year.

In 2015, Anik went back to basics for her first English-language album, Lost Soul. The singer who, over the previous decade had served up a steady stream of rock hits, now surprised her fans with an album of ballads. Her sound, however, remained reliably intense and the music became the soundtrack to a feature film of the same name which went on to be showcased at the two most prestigious film festivals in Quebec. In 2016, Anik was asked to score her first film, the Canadian box office hit, Bon Cop Bad Cop 2. Her brilliant soundtrack won the SOCAN PRIZE for best film score in 2019. In 2021, in parallel with the release of her second children’s book Nathan at the bottom of the ocean, she is working on the original music for Escouade 99 (an adaptation of the Brooklyn Nine-Nine series) and the release of her new and highly anticipated sixth album Love in Silence.

Working on her music videos with directors Robin Aubert and Francis Leclerc, Anik was exposed to filmmaking, and she was immediately hooked. It all came together for her when she co-directed her feature, Lost Soul in 2015-2016. With her second short film, La Porte screening opening night at Québec Cinéma 2019 and being selected for the St.John’s International Women’s Film Festival, her most recent work, Sois Sage, being presented at the Fantasia International Film Festival, and several of her film scripts in development, notably the writing of Lazy Bogan House, Anik Jean has carved out a unique place for herself in cinéma.

Original album concept, soundtrack presented in projection-concert of the film of the same name.

Album dedicated to her brother, recorded in her personal studio.

The single « J’aurai tout essayé » duet with Robert Smith (The Cure) is standing at the top of the charts for almost a year. Cover of « Wild is the Wind » (Nina Simone, also performed by David Bowie), duet with Pierre Flyn « Si tu voulais » and an acoustic version of « Je sais »

Nathan at the bottom of the ocean

Nathan in the land of pirates

Opening of the Rolling Stones concert

Featured on one song on the album: Elles chantent Cabrel

Featured on one song on the album: Roll Play 2

Featured on one song on the album: War Child présente – Héros

Collaborator at La Tour ( with Patrick Huard) on TVA

Spokesperson for the Guignolée des Médias